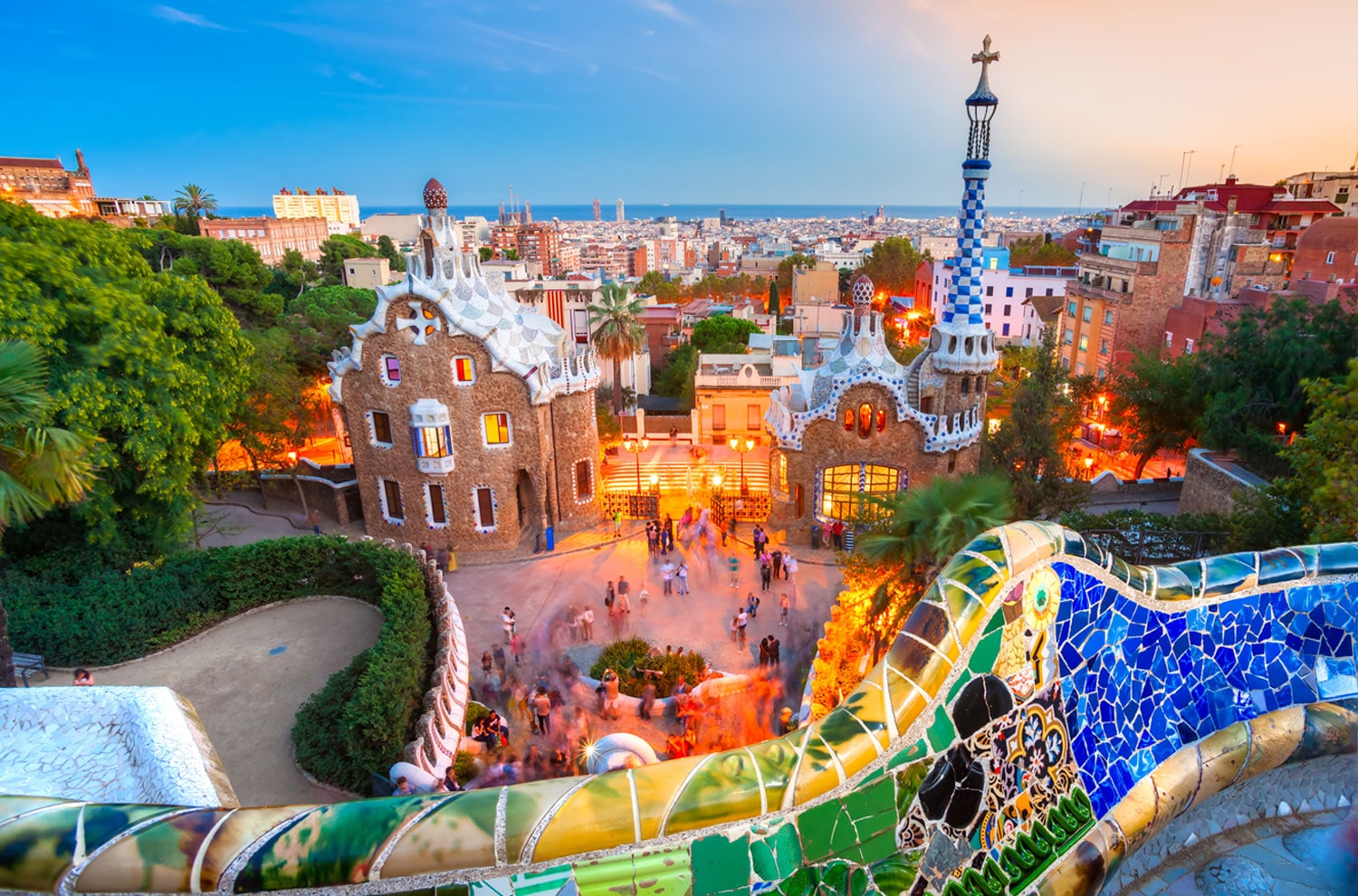 With a population of almost one and half million, Barcelona, the capital and largest city of Catalonia and Spain’s second largest city, gained international recognition in 1992, by hosting the Olympic games that brought an immense change in the tourism industry.

This stunning event transformed the city, the effects of which are felt even today, with renovated (sometimes bulldozed) neighbourhoods encompassing modern designs in everything, from public buildings to a simple park bench or an event poster.

The mesmerising mix of ancient and modern architectures, alluring cafes and the sunlit Mediterranean beaches – all make Barcelona a treat to the senses. Part of your visit to Barcelona should include a walk through Barceloneta waterfront, a stroll along La Rambla, visiting Gaudi’s unique creations including his magnum opus, the SagradaFamilia. The electric vibes of Barcelona can be felt well into its night over regional wine and cuisine in the umpteen tapas bars dotting the town.

Barcelona’s best experiences are in the core centre of the town, around the Ciutat Vella (‘Old City’). The beaches upon which the city is built provides relaxation during the long, warm weather. 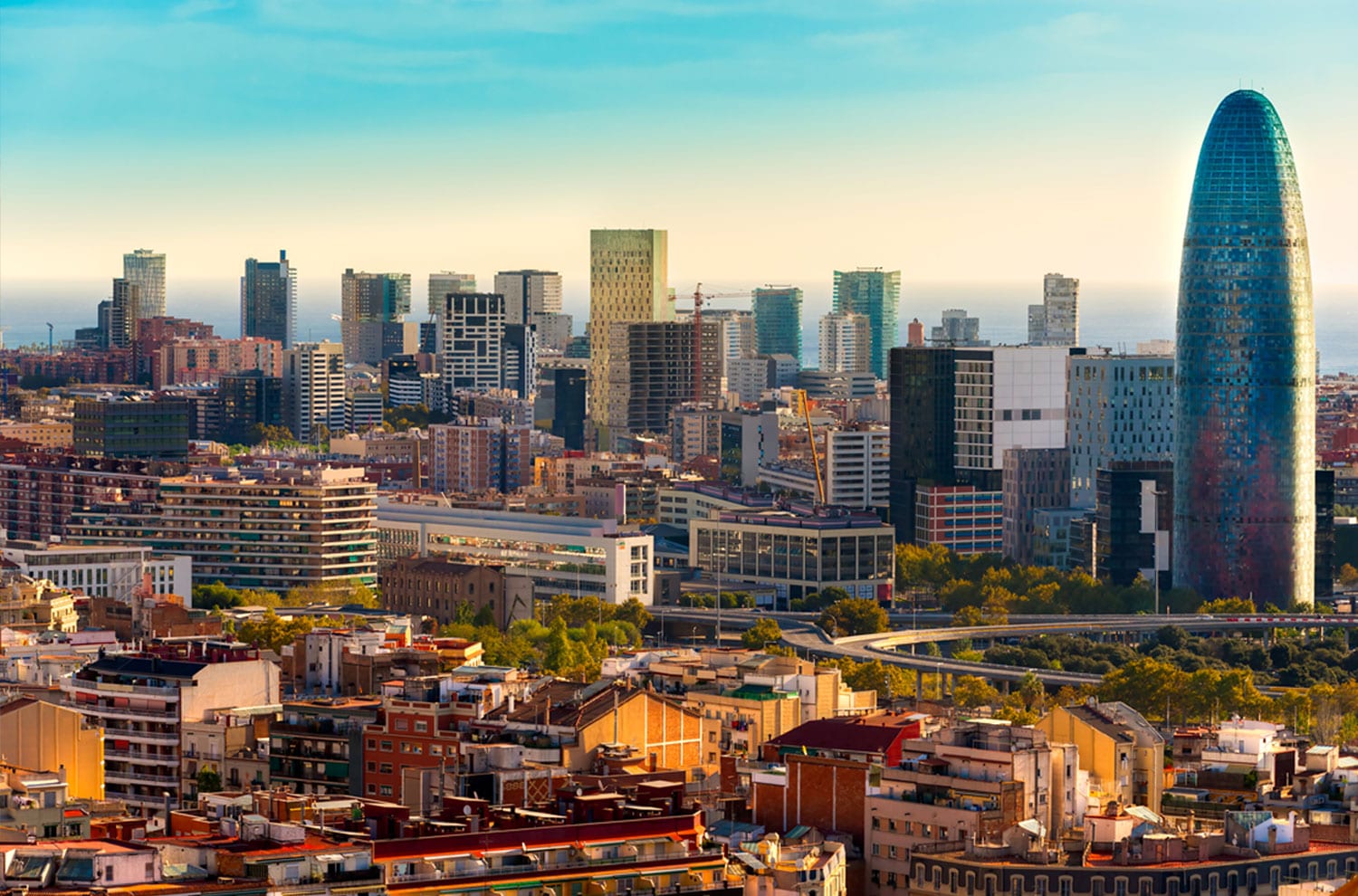 To avoid crowd and to enjoy the best weather, the right time to visit Barcelona is from April to June and from mid-September to mid-December. Huge traffic snarls are common during the beginning and end of August, when the Catalans and the Basques take their annual vacation. August sees most major cities in a relaxed mood, but for the tourists, thankfully, Gràcia’sFesta Major in Barcelona and Semana Grande in Bilbao see those cities sprightly and alive during the summer break. Barcelona’s cultural calendar is kept full by a wide range of star-studded music and theatre festivals. Though some shops and restaurants remain shut for a part of the month, museums are open.

Barcelona International Airport
Flights from all over Europe and beyond land in the major transport hub of the city, Barcelona-El Prat International Airport. The two terminals T1 and T2 are linked by a bus shuttle every 5 to 7 minutes, reached in 12 minutes. T2 has A, B and C subdivisions.

RyanAir is an alternative carrier reaching Zaragoza, an inner city, from where a train will take you to Barcelona in an hour and a half. These flights are economical, costing around 35 euros from Paris, London or Brussels.
From the Airport
The city’s shuttle bus service Aerobúsdrives passengers to the city centre (Plaça de Catalunya), from the Airport (both terminals), leaving every 5 to minutes from A1 and every 10 to 20 minutes from A2, daily, from 5:30 a.m. to 1 a.m., the journey lasting for half an hour and longer during rush hour.

By rail
Many regular trains run daily from other parts of Europe via France (including overnight hotel trains).
Main train stations: 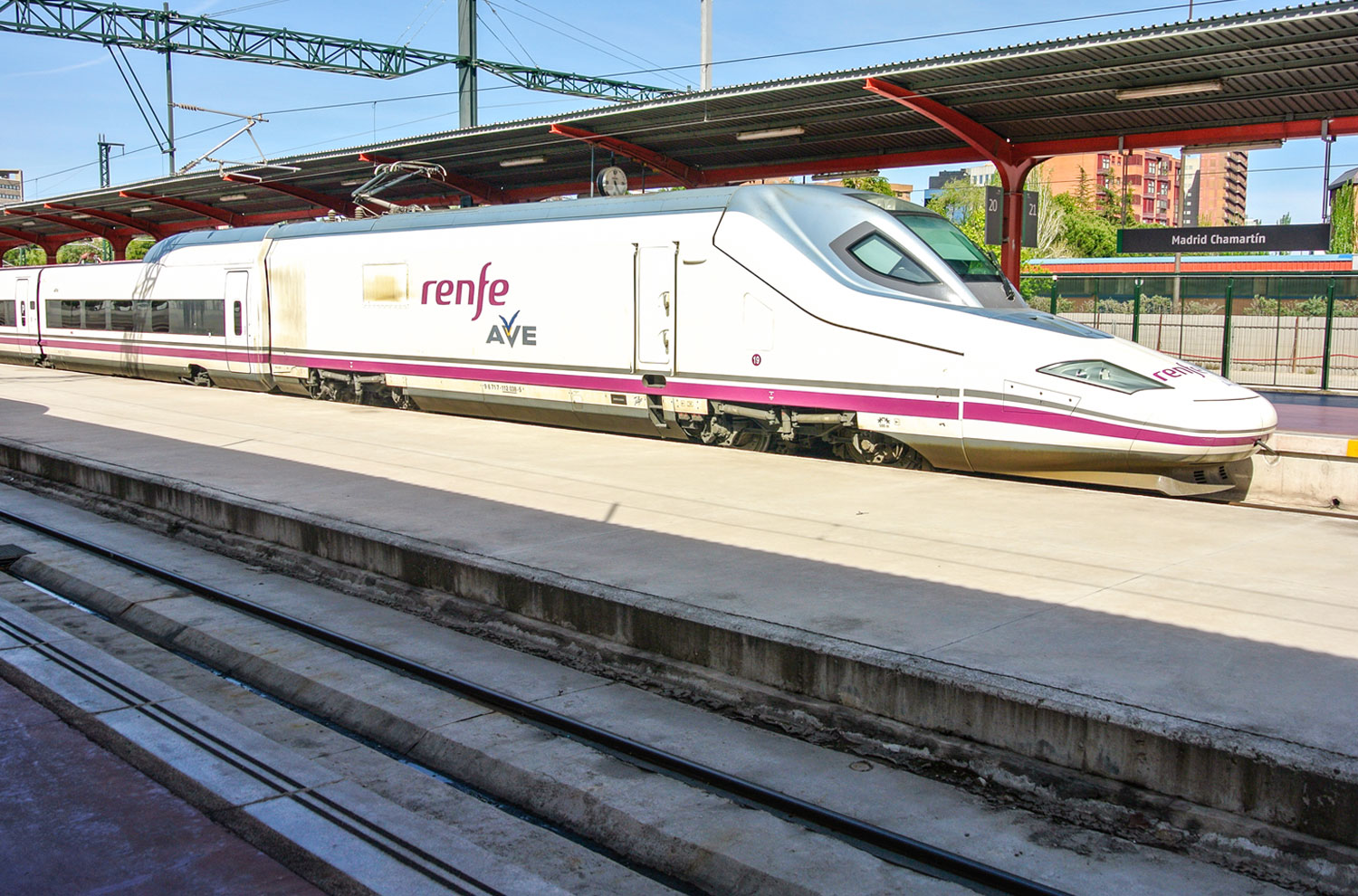 The long awaited AVE high speed train line to Madrid, opened in February 2008. Running 11 trains a day the travel time is 3 hours with intermediate stops or 6 trains a day during peak hours every morning and evening, non-stop travel would take 2 and a half hours. 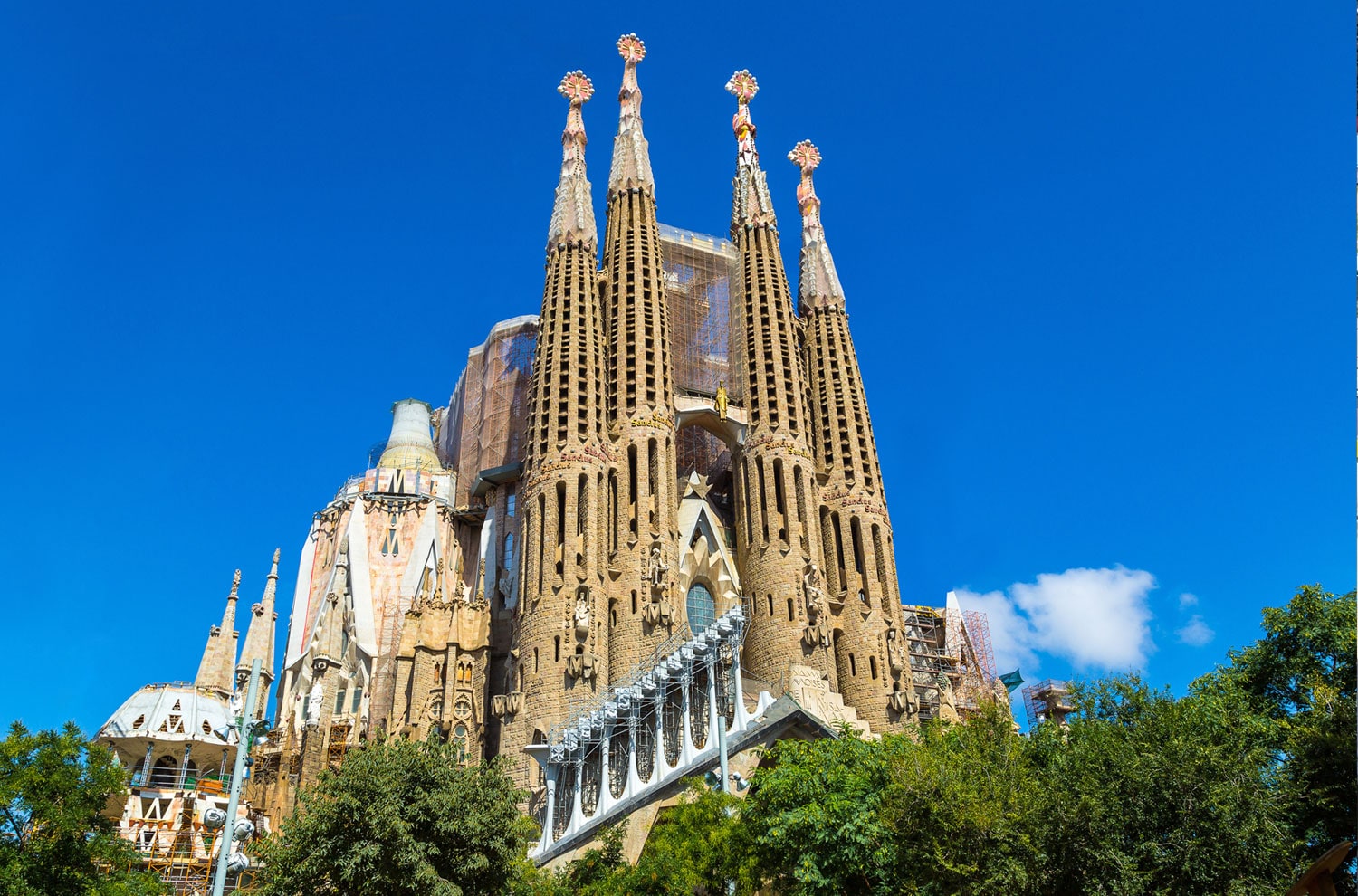 The sheer height of La Sagrada Familia is awe inspiring. The cathedral exudes a medieval charm and is still under construction after 100+ years! The highest tower will be higher than those that stand today. 2.8 million visit this place every year and it is the most visited monument in Spain.

Pope Benedict XVI was the most recent luminary who visited the place and consecrated the church in a huge ceremony in November 2010.

A conservative society that wanted to build a temple as atonement for the city’s sins of modernity, commissioned this church – Temple Expiatori de la Sagrada Familia (Expiatory Temple of the Holy Family) and commissioned the famous Catalan architect, Antoni Gaudi’s who later became obsessed with its creation. He took up the task of completion of this church as his holy mission. He contributed his all when funds dried up and never shied away from pleading to any potential donor.
Public subscriptions alone helped found the building, hence the slow progression of the construction. Once, when the extraordinary delay in the construction was pointed out to Gaudi, he is alleged to have said that his client had plenty of time on his hand and was in no hurry and was the reason Gaudi was nicknamed ‘God’s architect’.

Only the crypt, the apse walls, a portal and a tower were finished at Gaudi’s death in 1926. By 1930, three more towers were added that completed the northeast (Nativity) façade. Anarchists burned and destroyed the interior, workshops, plans and models, in 1936. The year 1952 saw the work resume but with controversy clouding progress. The probable year of completion is predicted to be anywhere from 2020s to 2040s.

Book your tickets online to avoid the wait. The tickets can be collected at Sagrada Familia. The time of visit needs to be mentioned while booking online. A ticket either to the Passion Tower or the Nativity Tower will grant you entrance an hour before the time you have opted for. This will allow you to stay on in Sagrada Familia for as long as you want to, after descending the Tower. There is an elevator for the ascent and the descent in the Passion Tower. But the Nativity Tower has an elevator only for the ascent. The descent has to be by foot. This way, you get to enjoy a beautiful view of the city as you climb down. 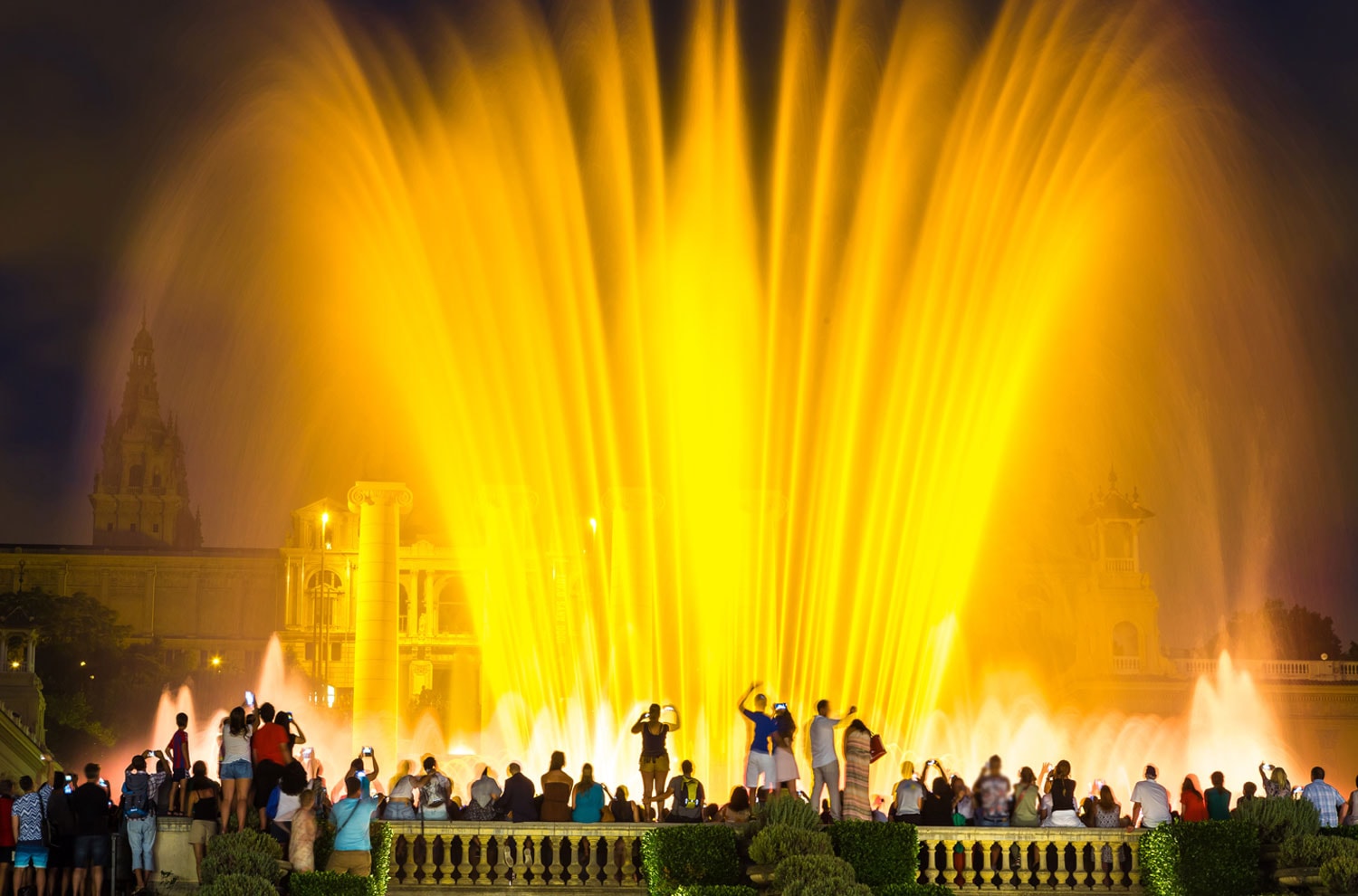 Listed in the ‘must see’ list of Barcelona, The Magic Fountain presents a spectacular show of light and music on water! Built in 1929 as one of the main attractions of the Barcelona World Fair, the Font Magica still captivates its 2.5 million visitors, annually! Admission is free to this water and light show, held during summer, every Thursday through Sunday. 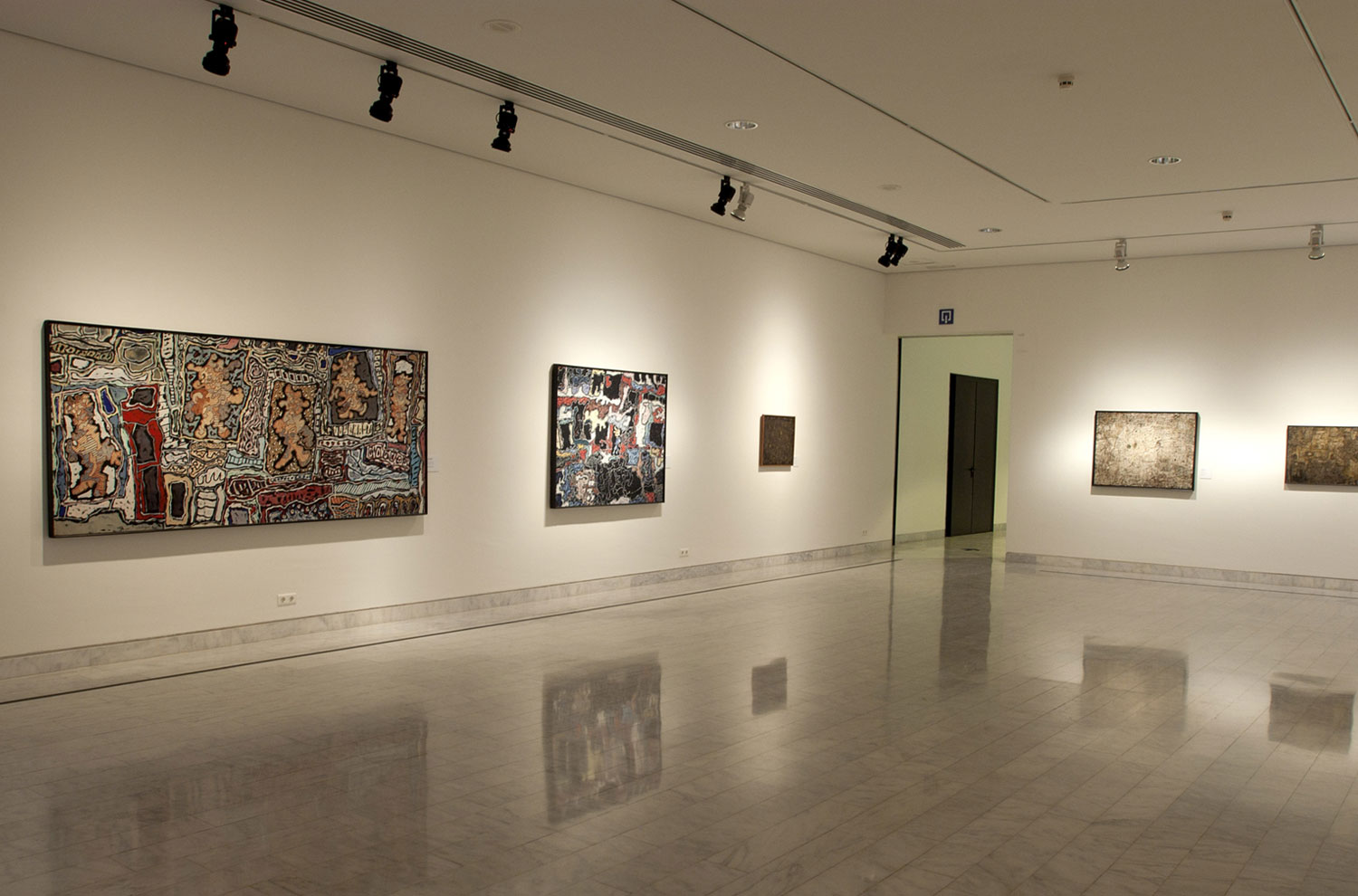 Though Malaga is his birth place, the world renowned painter Pablo Picasso lived in Barcelona with his family from 1895 to 1904. He spent his formative years as an artist, here.
Picasso’s father was an art teacher. Though Malaga was where Picasso had his early art studies, it is Barcelona which had a huge influence on his early, struggling years, as a painter. His first exhibition of his work was in Barcelona and considered himself to be a Barcelonean. 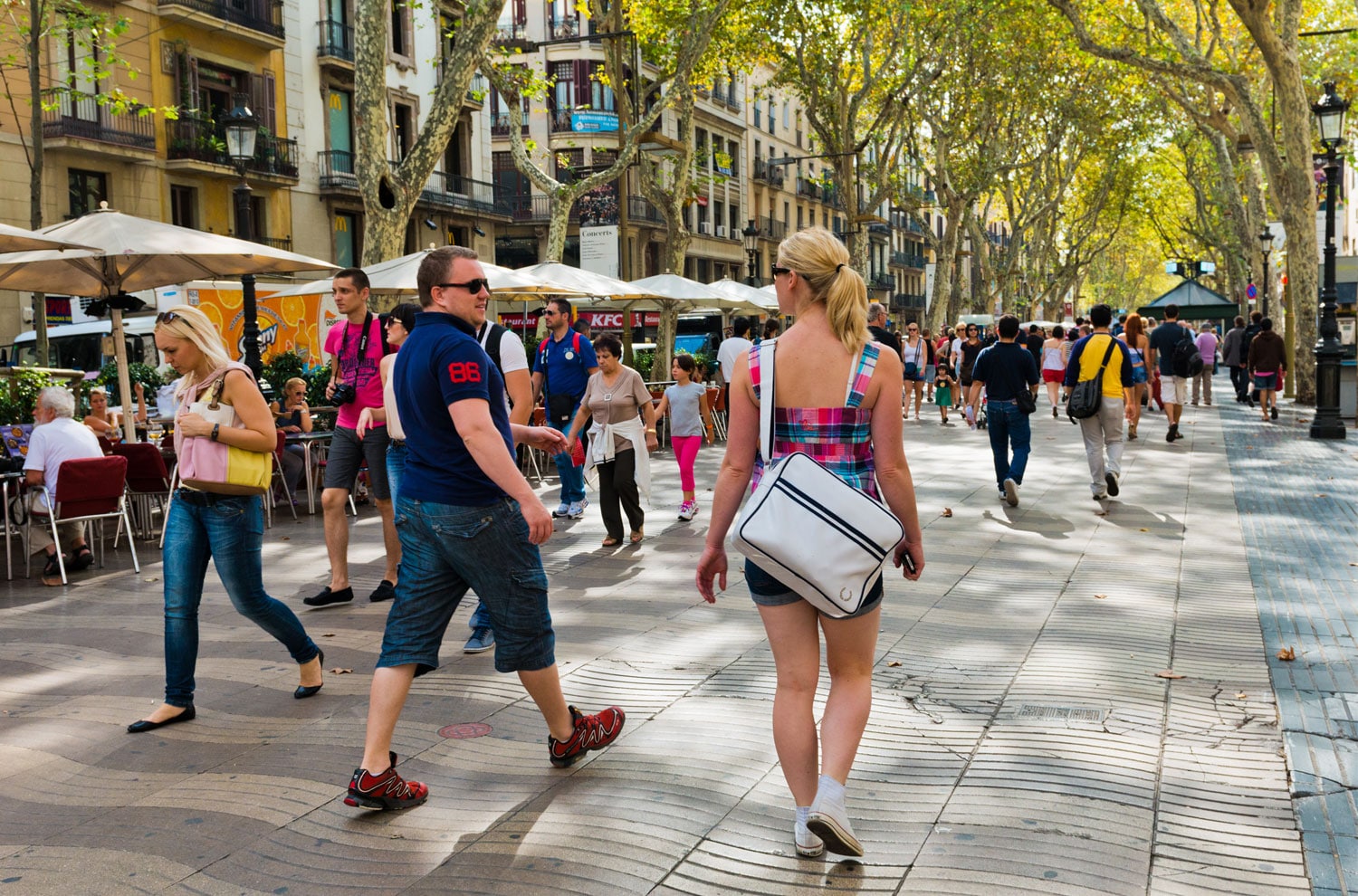 “It is the only street in the world which I wish would never end”, said the Spanish poet Federico Garcia Lorca, about La Rambla, that offers a very pleasant ambience for a stroll! It starts at Plaza Catalunya and ends at the Monument of Columbus at the Port Vell harbour of Barcelona. Since it is actually an assortment of various stretches of streets, it is also called Las Ramblas. It is free to visit during the day and early evening. Beware of pickpockets on La Rambla and in the Metro stations nearby. 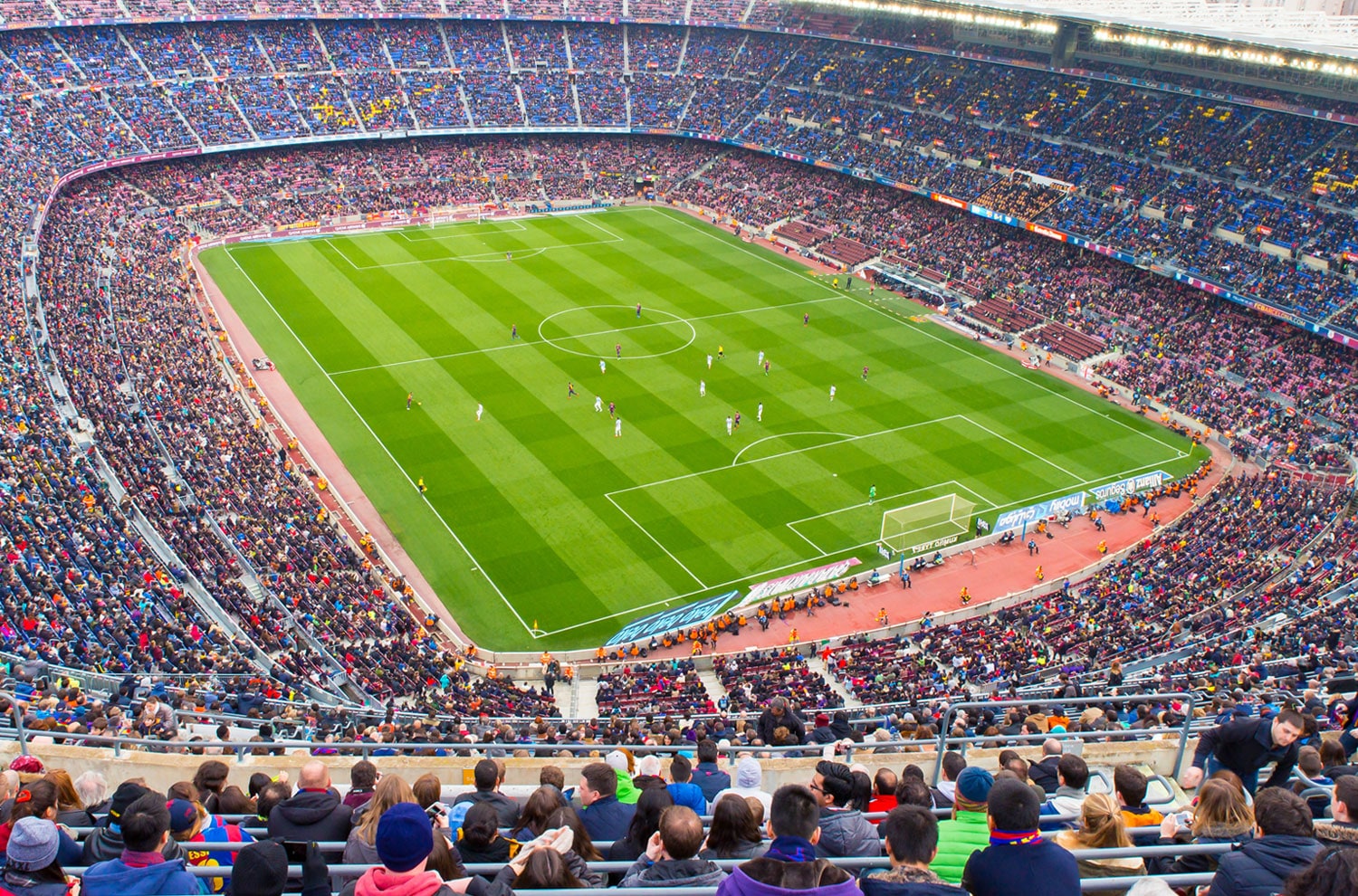 When there are no matches, the stadium and museum will be free for a visit. Among the popular places of interests of Barcelona, are the Camp Nou stadium and the FCB museum. Camp Nou has the largest of the Nike stores in Europe, filled with Barca merchandise. It is must-see for a football fans. 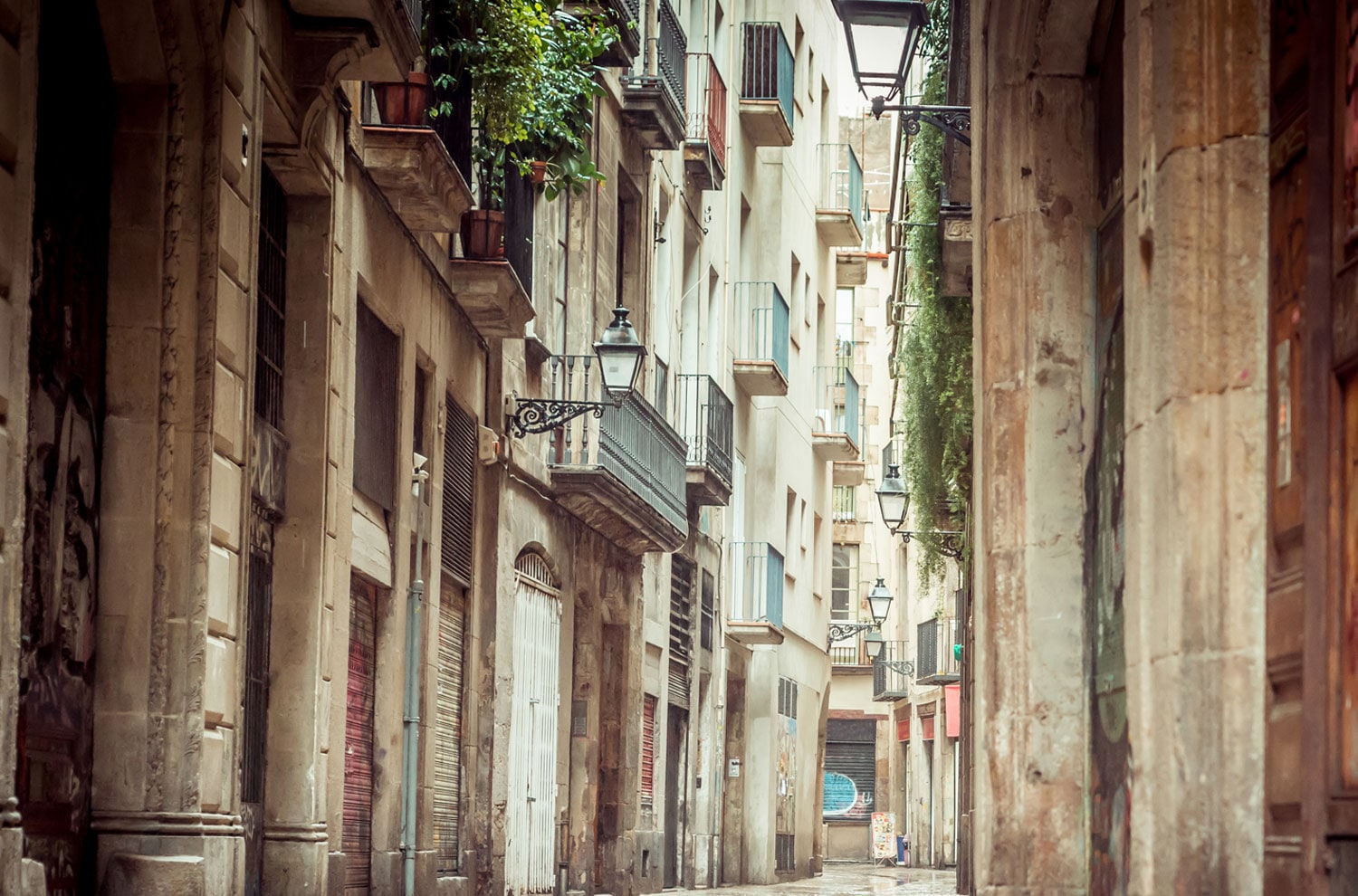 The gothic quarter, Barrio Gotico, is the medieval city of Barcelona, since the middle ages. It developed around the old Roman town of Barcino, the oldest part of Barcelona. This gothic area has many beautiful plazas, markets, museums and churches. Parts of the Roman walls can be still seen. The Museu d’Historia (the Barcelona history museum) exhibits remains of Roman houses and streets of Barcino in Roman times. The visit to the gothic quarter is free and is best seen on foot, as tour buses cannot get through these narrow streets. 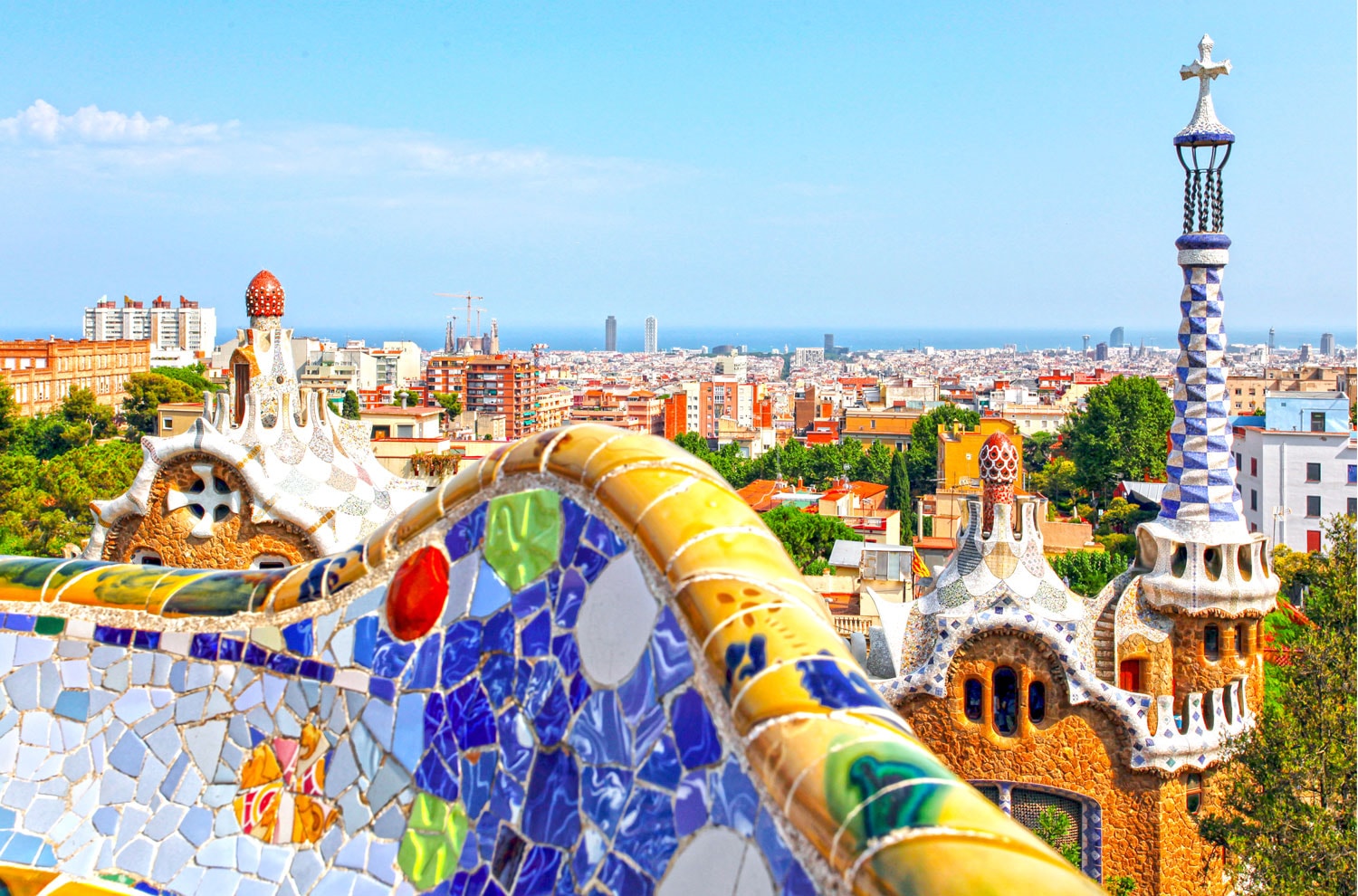 Declared a UNESCO Heritage Site, Parc Guell is considered to be one of Gaudi’s best artistic works. This park is atop Carmel hill, hence, reaching it will be an uphill walk if you take the hop-on-hop-off bus or metro station Vallcarca. You can also take a taxi up to the front gate of the park. The original idea was to build a private residential garden village with 60 houses which ultimately failed as business venture. In 1923, the park was donated to Barcelona’s city council for the public. 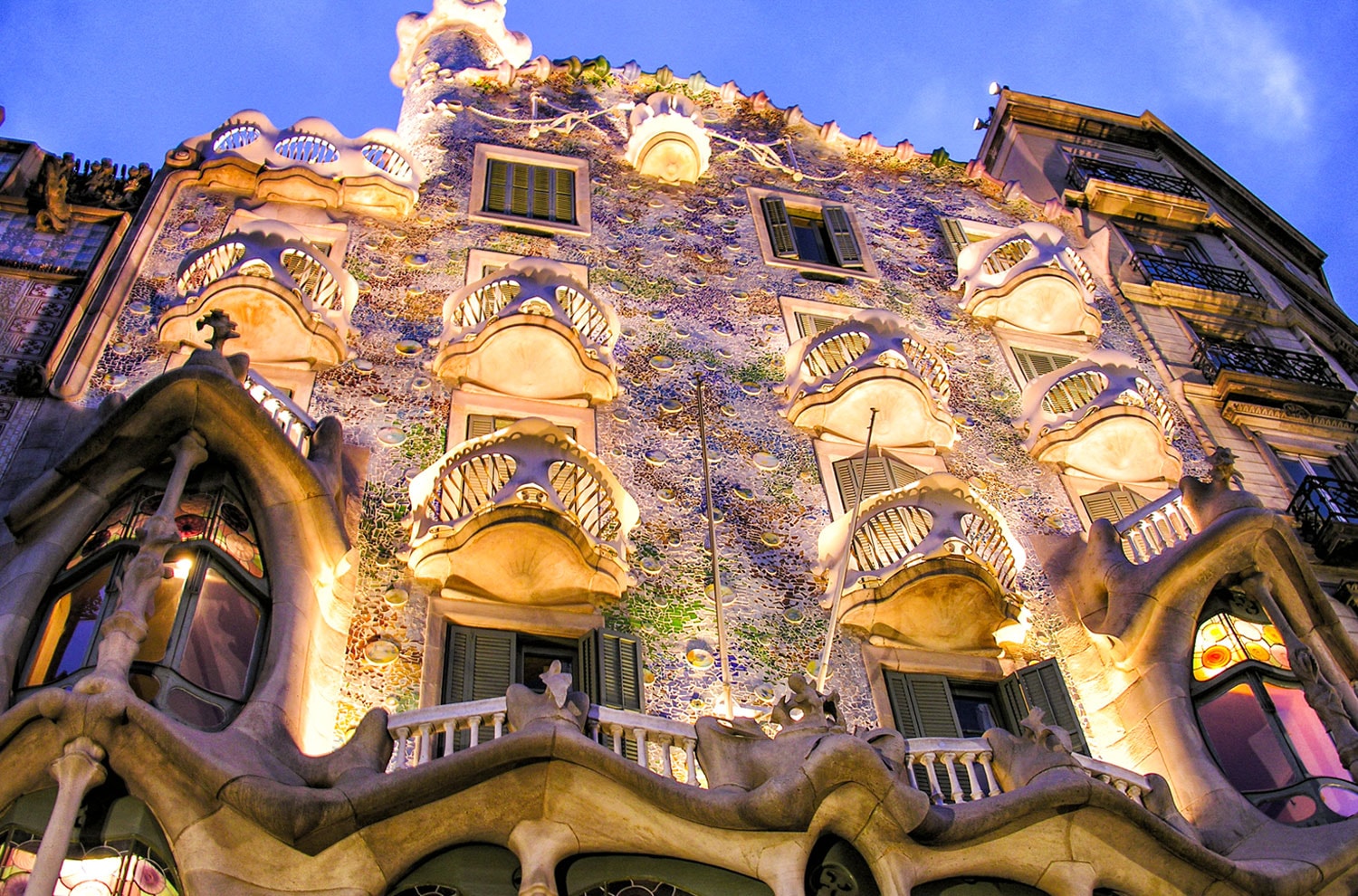 Centred in Barcelona and Catalonia from 1888 to 1911, Modernisme was a Catalan cultural movement and Antony Gaudi was its most famous practitioner. A handful of modernist buildings are exemplary. You will three of them on a single block called Illa de la Discordia (the Block of Discord) on the street Passeig de Gracia. They are ‘Casa Amatler’ designed by Josep Puig i Cadafalch, ‘Casa Batlo’ designed by Antoni Gaudi and the ‘Casa Lleo-Morera’ designed by Lluís Domènech i Montaner. 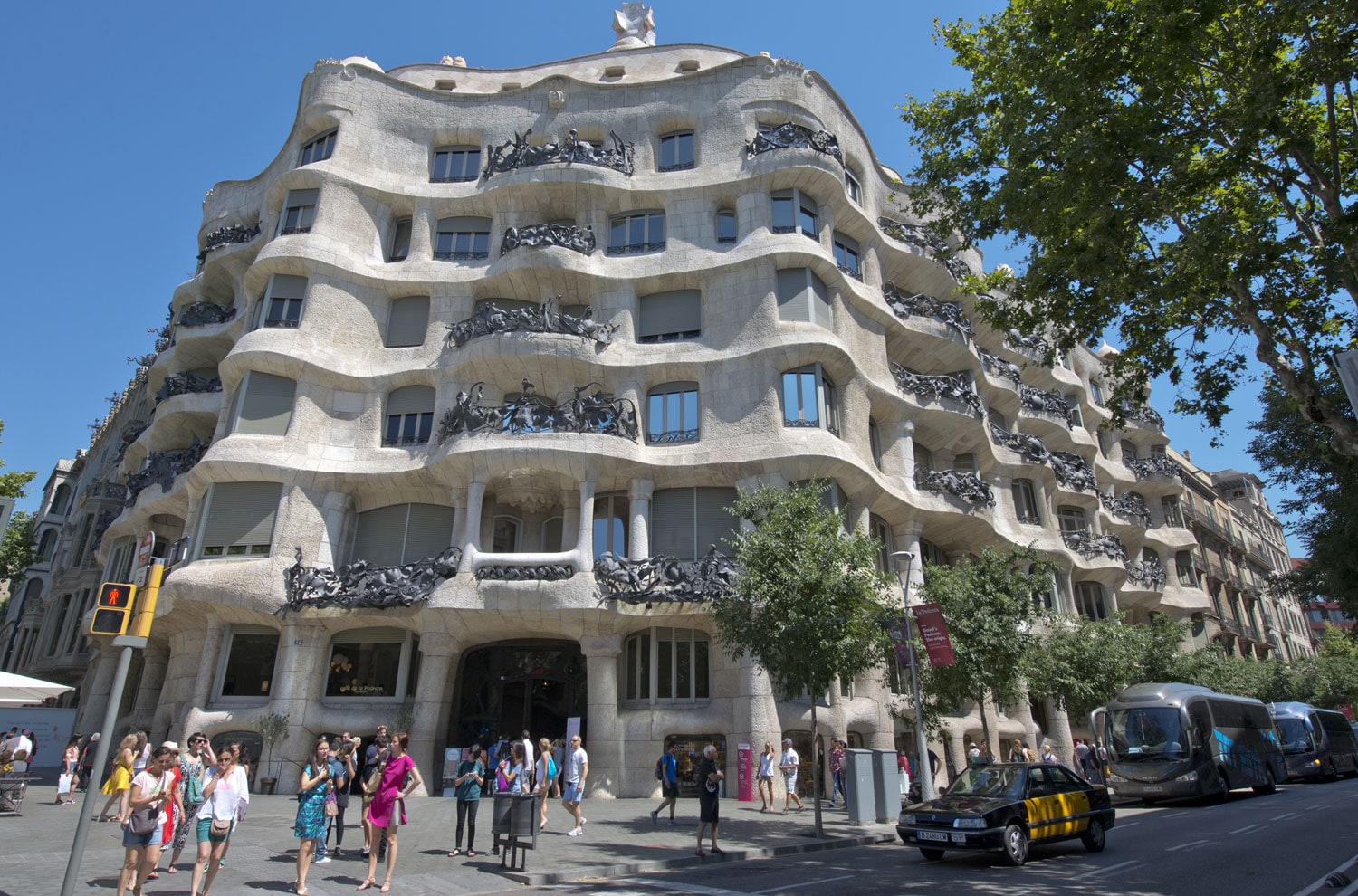 On the opposite site, a little further up the street Passeig de Gracia, is a building, representing Gaudi’s renowned architectural skills – ‘Casa Mila’, nicknamed ‘La Pedrera’ (the quarry). 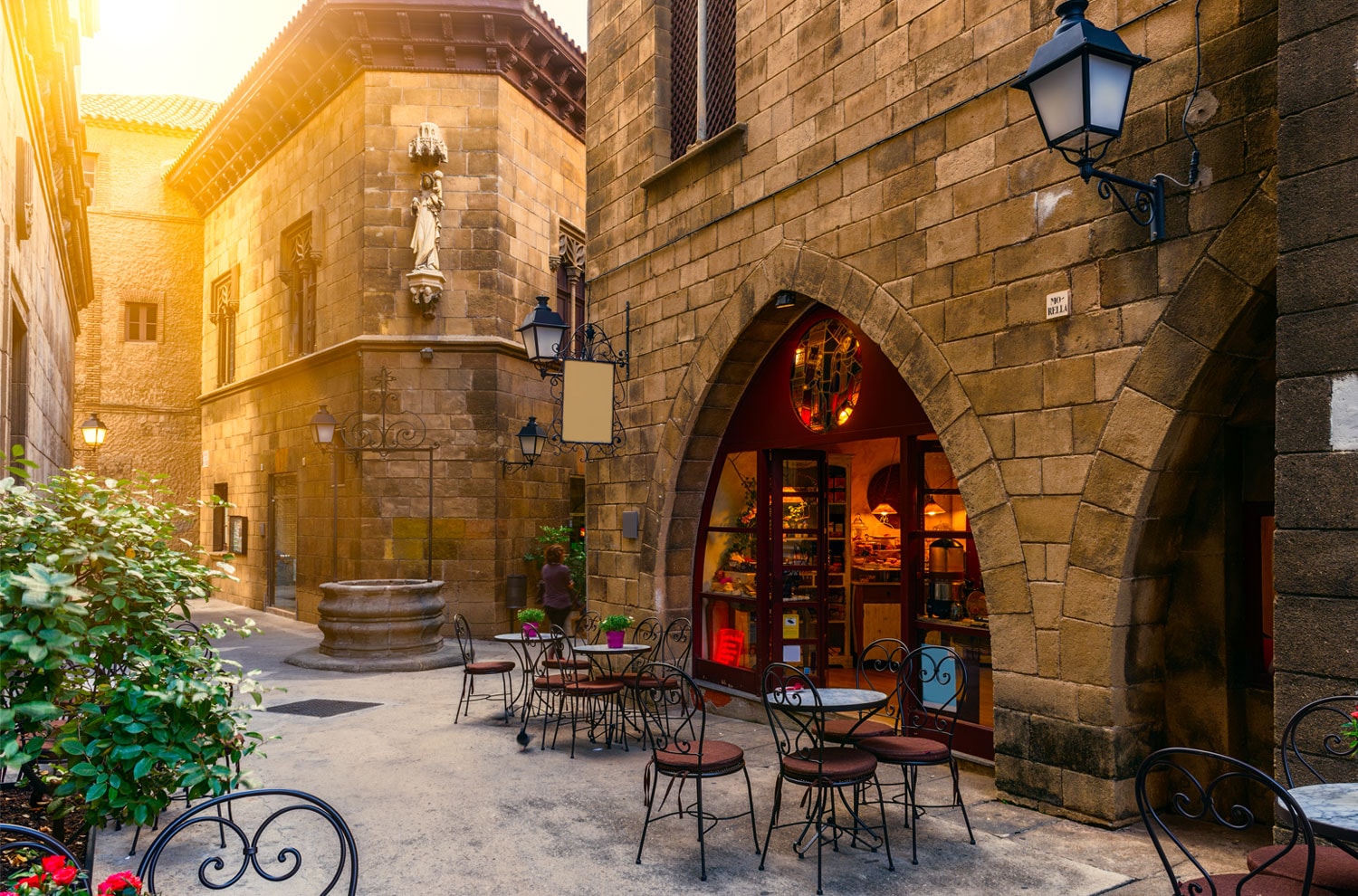 Montjuic hill has an old fort atop called Montjuic Castle, besides its parks and other attractions. This castle provides fantastic views of the city. On this hill is a unique Spanish village called Poble Espanyol. This village was built in 1929 as an architectural experiment, for the Barcelona 1929 World Fair and Universal Exposition. It is the 4th most visited attraction in Barcelona. Built to showcase Spain’s varied architectural styles, the village became very popular and was left intact after the world exhibition. There are cafes, open night clubs, restaurants and over 40 handicraft shops. 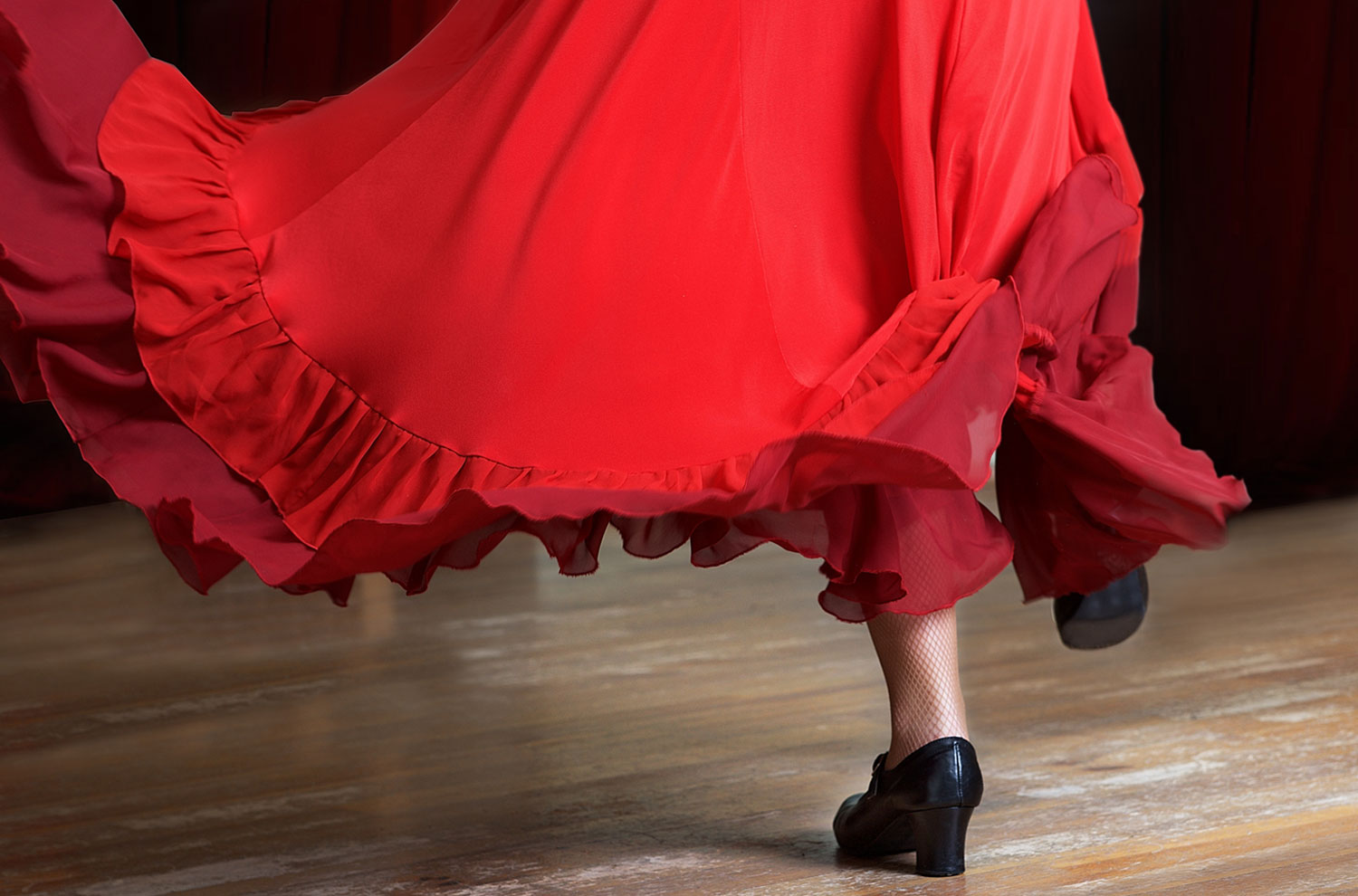 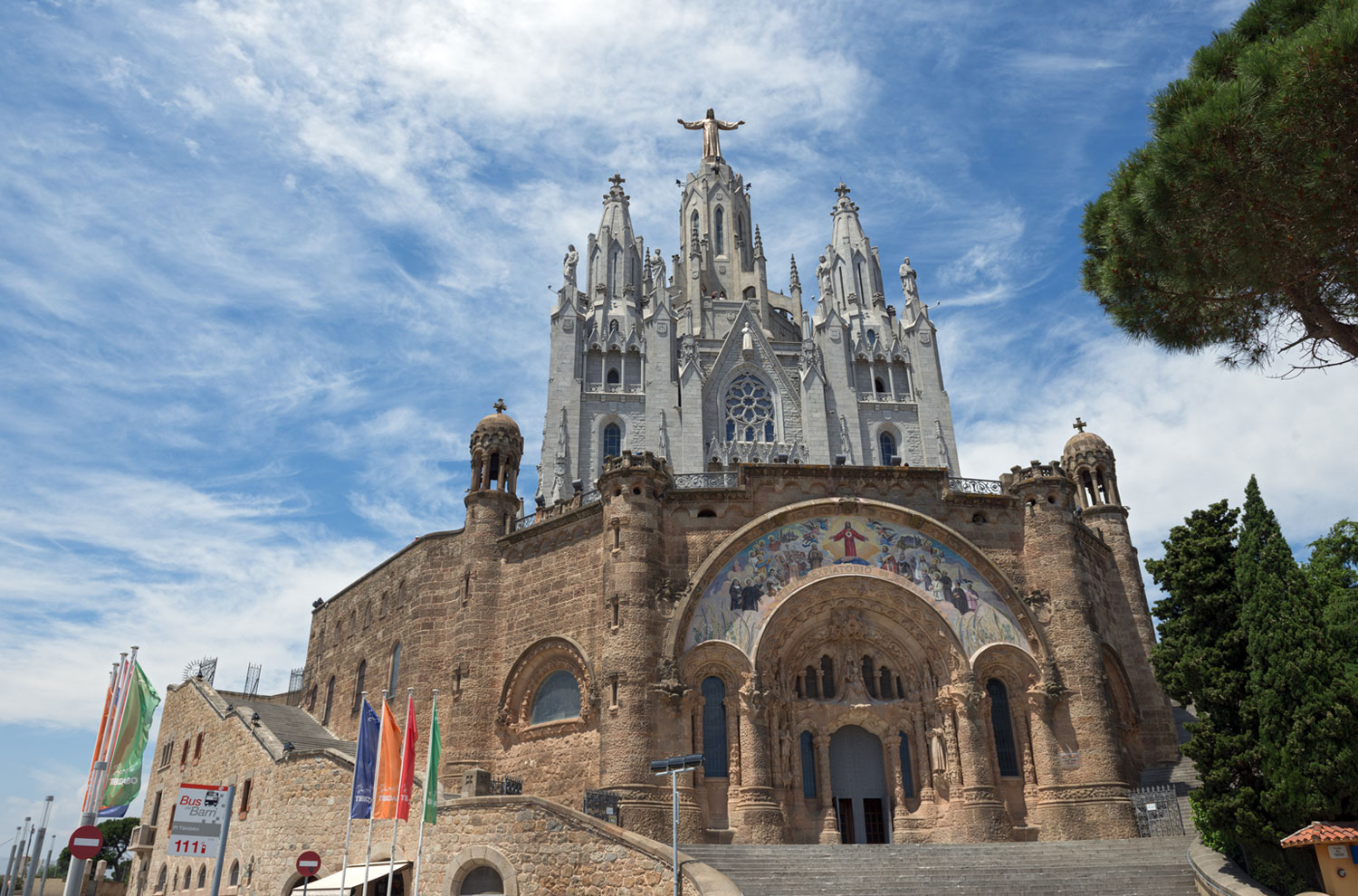 Kids will enjoy a visit to Tibidabo. The vintage amusement park and the spectacular view of Barcelona work their charm on visitors. The amusement park is open in the summer from March to September. The top of the Tibidabo can be reached by a vintage Blue Tram that connects to a mountain railway. There is also a bus from Plaza Catalunya directly to Tibidabo. 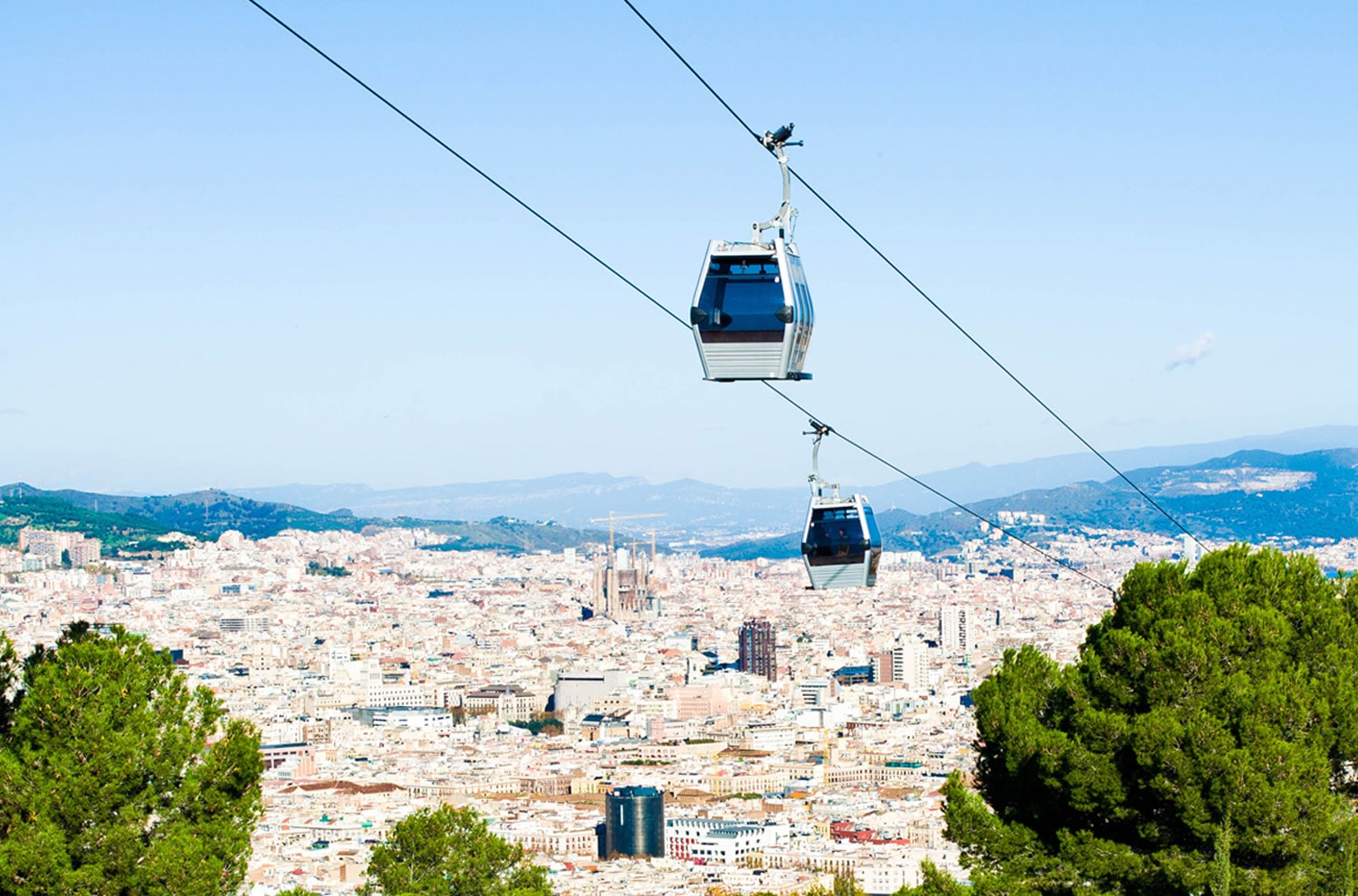 Connecting Montjuic and Barcelona, the harbour aerial tramway is 1450 metres long. There is an elevator-accessible restaurant atop the 78-metre-tall Torre San Sebastian Tower in Barcelona, from where the tram starts. It stops midway at Torre Jaume I Tower near the Columbus monument. This tower is 107 metre tall and is the second tallest aerial tramway support tower in the world! The final point is Montjuic.

Places of interest out of Barcelona 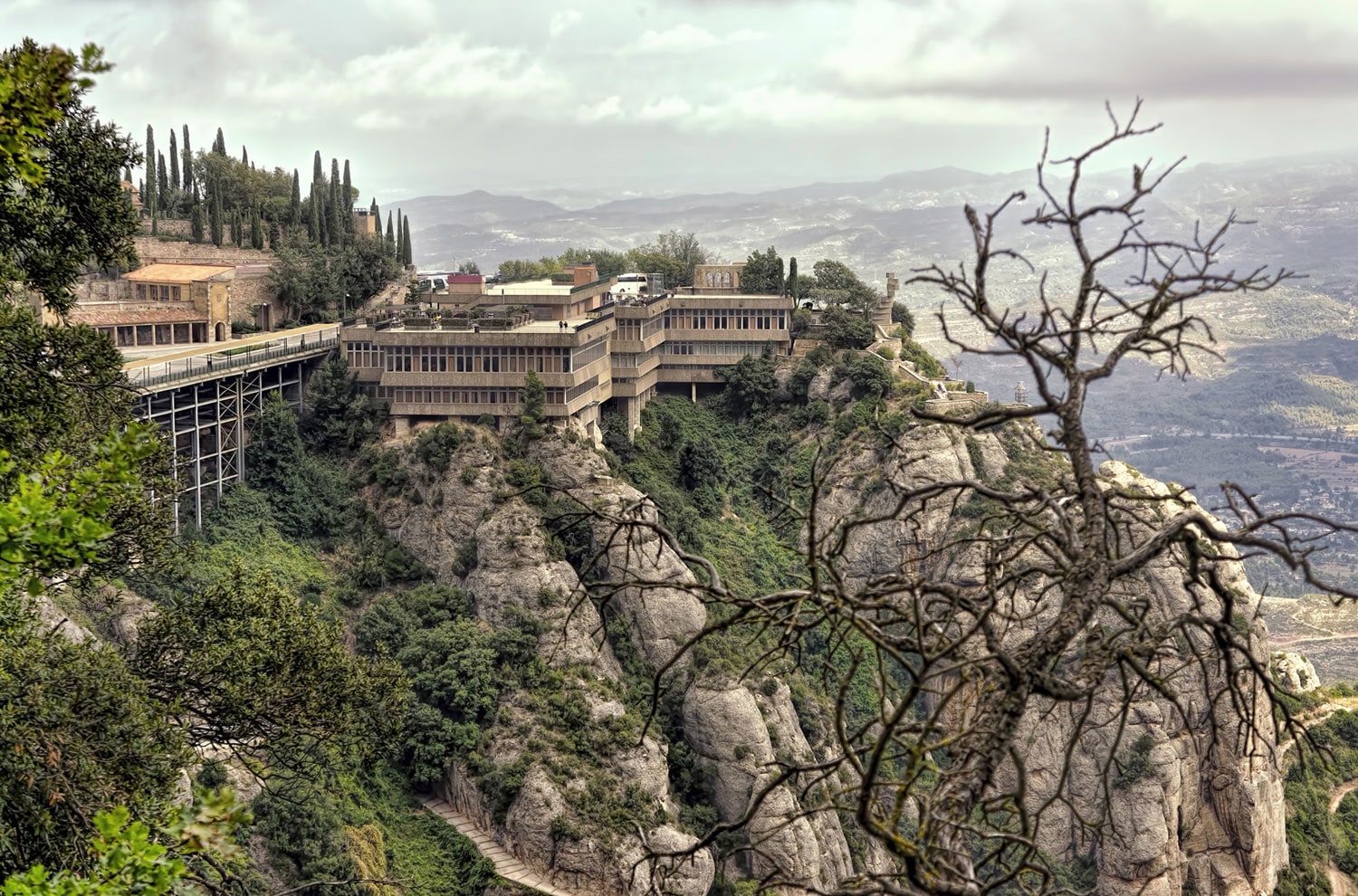 Montserrat mountains, monastery and basilica is open year round and are free to visit. The Black Virgin of Montserrat and the breath-taking view of rock formations and the city make this place one of Barcelona and Spain’s major tourist attractions. It is visited by 3 million travellers and pilgrims every year and is just one hour’s travel from Barcelona. 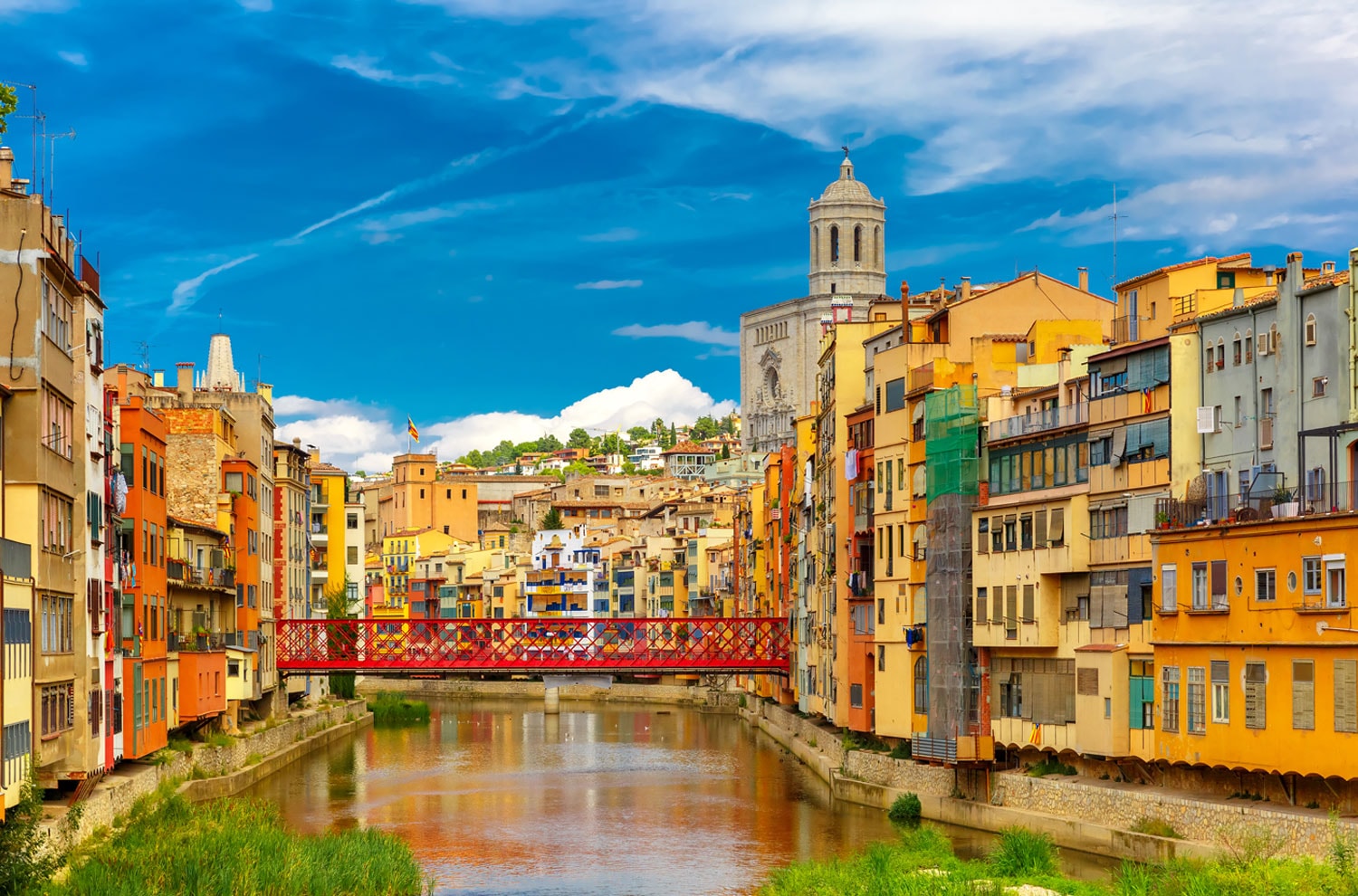 Just over an hour by bus or train, to the north of Barcelona, is Girona, a historic jewel. Abound with legends and beauty, the city has been host to new episodes of the TV show Games of Thrones. The colourful hanging houses over River Onyar, the well-preserved Medieval Jewish quarter and the walled Old Quarter (Barri Vell) with a history dating back to the Romans, have made this city famous.

BACK TO HOME PAGE